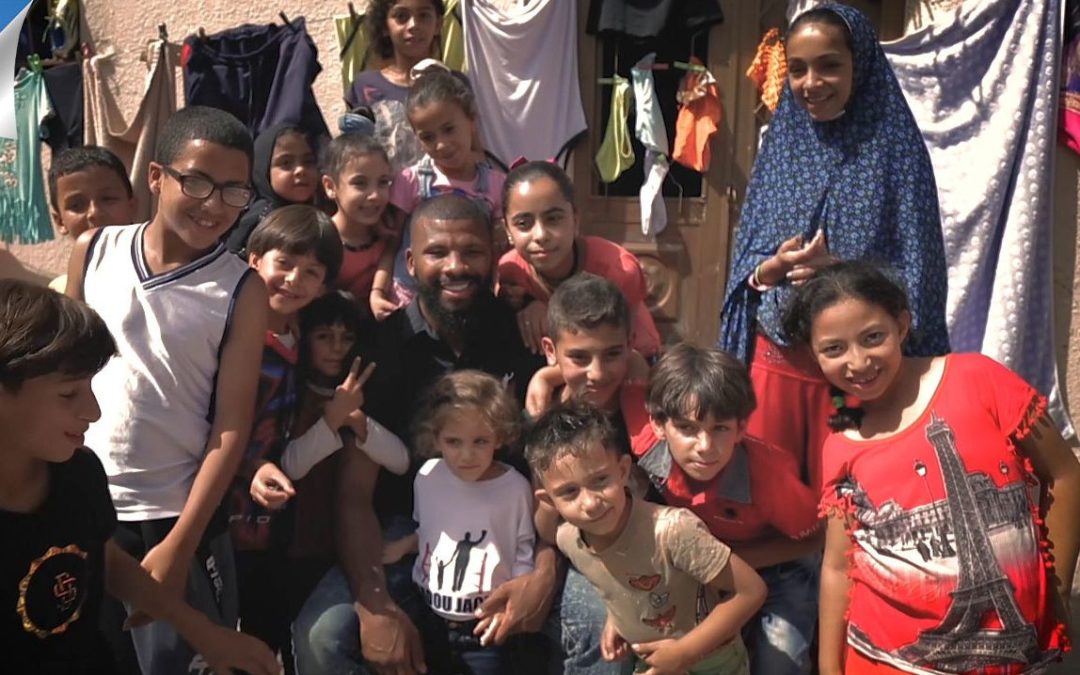 BADOU JACK could sit back and enjoy the fruits of his labour; two world titles and millions in the bank as the posterboy for Floyd Mayweather promotions.

Instead, the light-heavyweight ace is fighting for refugee children that are freezing to death, starving hungry and painfully poor. Badou Jack wants to help children around the world Almost every sports star has their own charity or foundation but few are on the ground physically feeding and clothing some of the world’s most deprived people like the 34-year-old Swede.

His religion and paternal instinct compel him to help on the frontline and, after spending almost a million dollars of his own money on aid trips around the world, he has now set up the Badou Jack Foundation.

If these children need a hero, then there is no better man than the dad-of-two who struggles to describe the agony he has witnessed first-hand.

The former WBA light-heavyweight champ and WBC super-middleweight king said: “You’ve got to try to be a hero. I try to fight for them. The two-weight boxing superstar is compelled to help refugee children

“Their houses are made of aluminium so in the winter they freeze to death.

“But somehow they always have a smile on their face. It is crazy how poor they are, it is so emotional just going there.

“We bought all these orphans lunch but one guy did not want to eat, he just wanted to take it home to feed his mum. They could be my kids.”

Before being handed a harsh draw against Adonis Stevenson in May, Jack visited his father’s homeland of Gambia and supplied three villages with food, water and electricity.

Since then he has made trips to Jordan to visit the Palestinian refugee camp in Al Baqaa and the Syrian camp in Zaatari. The scenes are devastating, as far removed as possible from the hedonistic tourist trap the Las Vegas resident now calls home.

Some of the Syrian children the foundation are helping were victims of chemical attacks when their country was ravaged by civil war.

The urge to return and help and save is overpowering, even for the rock-hard battler who has beaten Brits George Groves and Nathan Cleverly and was handed a harsh draw against James DeGale.

He said: “These kids have a bad life.

“I want to try to make a difference and try to help as many kids as possible. Not just Syrians but everywhere.

“We’re starting the Syrian and Palestinian refugees because there are wars going on there.

“I actually started in Gambia but it’s going to be all over the world no matter what religion, no matter what culture or anything. South America, Africa, Asia, Middle East anywhere.

“Now is the perfect time, when I’m at my top and at my best, I think this is the right time.

“Maybe I don’t do too much stuff while I’m in training camp, but between fights I try to do as much as possible.”

Jack is not a wannabe politician merely playing philanthropist. He is a father and a Muslim who is fiercely passionate about helping those most in need.

He is ready to defend himself against any accusation that his chosen causes are politically motivated. They are driven by empathy, compassion and faith.

He said: “I’m not too involved in politics and stuff.

“I’m just trying to help as many poor kids as possible.

“I don’t really care about all the Trump stuff, Republicans and Democrats I’m not into, I’m more about helping the kids.

“I’m a Muslim so that’s my duty to people, I’m on this platform right now, starting a foundation and helping as many as possible. That’s something I’m always thinking about.

“We’re really blessed, we really live a great life, not just in Vegas, in the UK, in Sweden, it’s amazing how we live and we take that for granted.”

Jack has already launched his own nutrition brand, named after his Ripper ring moniker.

And he intends to use all the science behind protein shakes used by so many athletes to help feed the impoverished children.

Then he wants to take his foundation around the world, taking it to the most needy, growing as much as possible.

He said: “Our first target is to supply them with the nutrition shakes, feed the kids and then we want to expand.

“We want to be the biggest foundation in the world.

“We do not even know how big this can be.”

Photos By: The Sun