The Badou Jack Foundation: How two-time world champion is using his fame to help refugees in Syria and Palestine 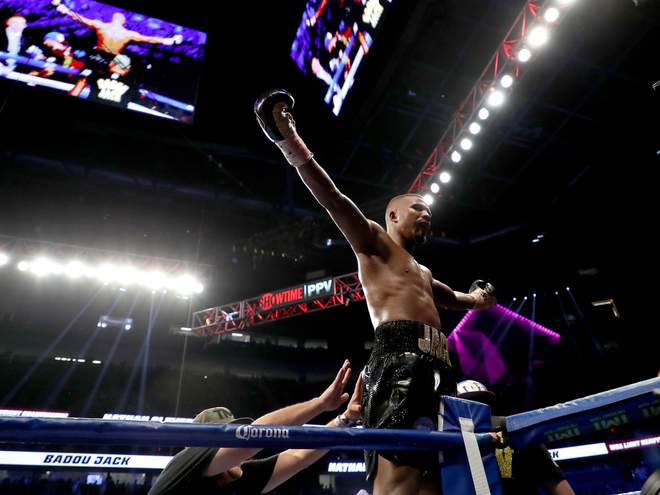 Interview: The Swedish boxer and Las Vegas resident may be an unlikely candidate for a humanitarian hero but he has established a foundation with the aim of helping lives torn by war

For a man who lives his life amid the ostentation of Las Vegas while punching people in the face for payment from boxing’s Liberace, Floyd Mayweather, Badou Jack might not seem like your average humanitarian. But the Swede, by way of Gambia, is hoping his exploits as a boxer will one day pale into insignificance next to the charity work which begun in his father’s west African homeland but has now extended into Jordan.

Jack is well known in Britain for beating both George Groves and Nathan Cleverly while his early 2017 draw with James DeGale left the Londoner requiring dental surgery. The 34-year-old has so far won world titles at two different weights and his career, by the way, remains very much at its peak.

The man who calls himself ‘The Ripper’ has now entered the golden years, during which every fight yields what would be widely considered as life-changing money. It is a promised land that most fighters never reach. Why, then, has Jack decided now is the time to focus his attention on two refugee camps, 7,500 miles away in Jordan?

“Now is the perfect time,” he said, slightly bemused by the question. “Now, when I’m at the top, I’m at my most high-profile and at my best. I think this is the right time. You’ve got to try to be a hero. Try to fight for these people. They’re just extra motivation. I am not going to fight forever. I think about it as I want to represent them more than I want to hurt other people when I’m in the ring.”

His work started in Gambia before his last fight, May’s majority draw with long-time WBC light-heavyweight champion Adonis Stevenson, and it has taken him to the Middle East thereafter.

“There’s a war going on there,” Jack added. “And we’ve got connections there. The refugee camp is in Jordan, so we wanted to start there, then we’re going to expand. I actually started in Gambia but it’s going to be all over the world no matter what religion, no matter what culture or anything. South America, Africa, Asia, Middle East – anywhere. “I’ve got two kids of my own, so I when I see these kids [in Jordan] have a bad life, I just want to try to make a difference and try to help as many kids as possible. Not just Syrians but everywhere. We’re starting with the Syrian and Palestinian refugees. My dad is from Gambia, it’s a poor country, so I know how they have it. My cousins, my relatives, nobody is rich or has got money. It’s inspiring just to go there. It gives me extra motivation when I go to the gym.”

His life, just a few miles from the Las Vegas strip, where he lives with wife Yasemin and their two young children, is worlds apart from the conditions he encountered in Jordan. Jack has already spent a significant sum of his own money on clothing, food and heating to get the Badou Jack Foundation up and running but the strategy for the next stage, which begins in October, will include a major crowdfunding campaign.

One of their initial targets is to provide protein-fortified meals for the inhabitants of the Zataari camp, which opened in 2012 and is estimated to host around 83,000 Syrians fleeing the ongoing civil war. They also plan to do the same at Al Baqaa, which first housed Palestinian refugees as far back as the 1967 conflict involving Jordan and Israel.

“We visited both,” said Jack. “Al Baqaa is more like a bad neighbourhood, it’s really poor. But the Syrian one… that was probably the worst one. It was a real refugee camp. Their houses are made of thin aluminium so in the winter they freeze to death. Right now it is really hot. But somehow they always have a smile on their face. It is crazy how poor they are, it is so emotional just going there.

“We bought all these orphans lunch but one kid, who was only about six, did not want to eat, he just wanted to take it home to feed his mum. They could be my kids. I’m a Muslim so this is my duty to people. I’m on this platform right now, starting a foundation and helping as many people as possible.

“Our first target is to supply them with the nutrition shakes, feed the kids and then we want to expand. We want to be the biggest foundation in the world. We do not even know how big this can be. I’m not too involved in politics and stuff but I’m just trying to help as many poor kids as possible. Anything I can do. I don’t really care about all the Trump stuff, Republicans and Democrats I’m not into, I’m more about helping the kids.”

Despite his presence in Vegas, where he rubs shoulders with the great and the good at the Mayweather Boxing Club, Jack has always been wired slightly differently to many of the other fighters based in Sin City. He had to rebuild following a shock first-minute knockout at the hands of Derek Edwards in 2014 but now, on a run of six straight world title fights, he is in the form of his career.

As such, he has no immediate plans to retire just yet, despite his burgeoning charity work.

“I’ll be 35 in October so I don’t know,” he said when asked how long he’s got left in the sport. “We’ll see. It might be 10 more fights, might be three, you never know. But all I want is big fights now. Who knows, maybe in the future I’ll go up another weight class. Cruiserweight is a possibility but right now I’m comfortable.

“I want to continue to win more titles, continue to give fans great fights – and obviously raise more money.”